When I was glueing my first aircraft, car, tank, together in the 1970's and got around to reading what wat inside these "boxes" technically, somewhere I realised it was about people. The design and manufacturing, but also the whole confict of WW2, all has to do with a lot of people.

Eindhoven was liberated by the 101st Airborne division. You can't mis it. Besides the montgomery, churchil and eisenhowerstreet, there is an Airbornestreet. Faded small pictures with cheering people and smiling soldiers. 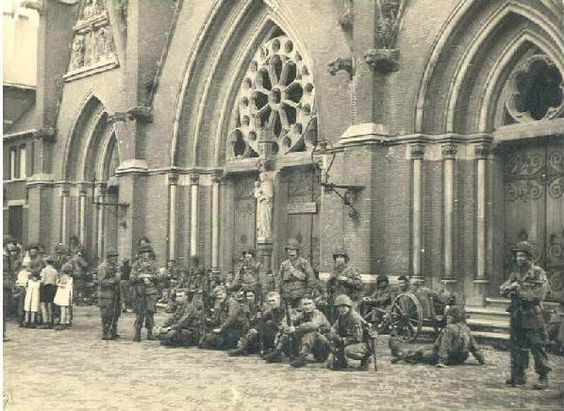 And than somewhere 1990 I had the good fortune to meet George Vanderslice and Bill Guernere. I talked for 1,5 hour with Bill about his life after World War 2, his childhood in Philadelpia. An amazing open and friendly guy. George kept in touch with all their former mates through the "Five-O-Sink". When the book on Easy company was released, I was amazed by their actions, that they just thought "someone had to do it" and understood their "Band of Brothers" feeling, and realised what an amazing men I owed my freedom to. They needed a monument! A statue in gold for everyone of them. Tom Hanks an Steven Spielberg did just that with the HBO mini series. Without forgetting the rest of them Bill stood out. His piercing dark eyes, usualy twinkeled. The simple joy, the boy-like pranks and humor of him and Babe Heffron. I found my personal hero.